In the ongoing test series against Australia (led by Ricky Ponting), this was day 1 of the second match. When Tendulkar came to bat, he needed 15 runs to beat Brian Lara’s highest runs in test Cricket world record of 11,953 runs. He did that in style with a smooth glide towards third man on the first ball after the tea break. Scoring 88 in a hundred and eleven balls, Sachin Tendulkar now stands at a whopping 12,027 runs and an average well over 50 – 54.17 to be precise. 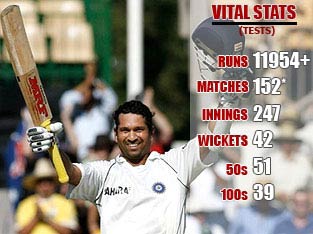 Tendulkar, as the humble champion as he is, when asked about his knock and world record said

“I’m quite pleased with the knock, when I went in we’d lost three wickets in no time, so it was extremely important to have a partnership. I was disappointed because we had targets and we thought, especially after those crackers went off (on getting his highest runs in test Cricket World Record), we’d have to focus on our game and continue batting for a long time,” Tendulkar said. “The reverse swing with the old ball was different to the new ball and it took me a fraction longer to adjust. I paid a heavy price for that.”

With no overconfidence or self-appreciation and as usual, he talked about the match and team spirit. Thats what makes this man a real master blaster.

Being congratulated by Ricky Ponting and Australian team

Rocky Ponting, the captain of Australia (who was the first to congratulate Sachin today), is potentially the only active Cricketer in the world who can beat Sachin Tendulkar’s world record. Ponting, with 10,239 test runs is number 6 in world rankings of all time test run scorers.

What needs to be understood when the press makes statements like this is: If Ponting will score, will Sachin just sit idle? Our master blaster probably will hold the record for the highest number of test runs forever!

What also needs to be mentioned in this articles is that dada – Sourav Ganguly also reached 7,000 test runs in this match. Congrats to you too Dada! We love you too!

India loves you Sachin and we’re really proud of you again today! 🙂